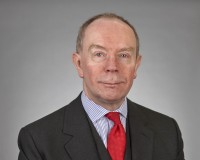 Ian advises for a number of DB and DC pension schemes including funding and valuation discussions, governance and corporate activity. He has gained extensive pensions law experience on a wide range of issues. This includes acting as an arbitrator and as an expert witness in court proceedings.

Ian is Chairman of the firm’s independent trustee company (ITL). As independent chairman or trustee of several pension funds, he has gained a good appreciation of the issues faced by trustee boards from a client perspective. He is also chair of Aegon UK’s master trust and independent governance committee.

For several years, Ian was named as one of the top 50 people in pensions by Engaged Investor.

Ian was awarded a British Empire Medal (BEM) for services to the community in the London Borough of Barking and Dagenham in the 2019 New Year honours list.

Representative Deputy Lieutenant of Greater London for the Borough of Barking & Dagenham.

Ian Pittaway comments on the future of pensions in The Times